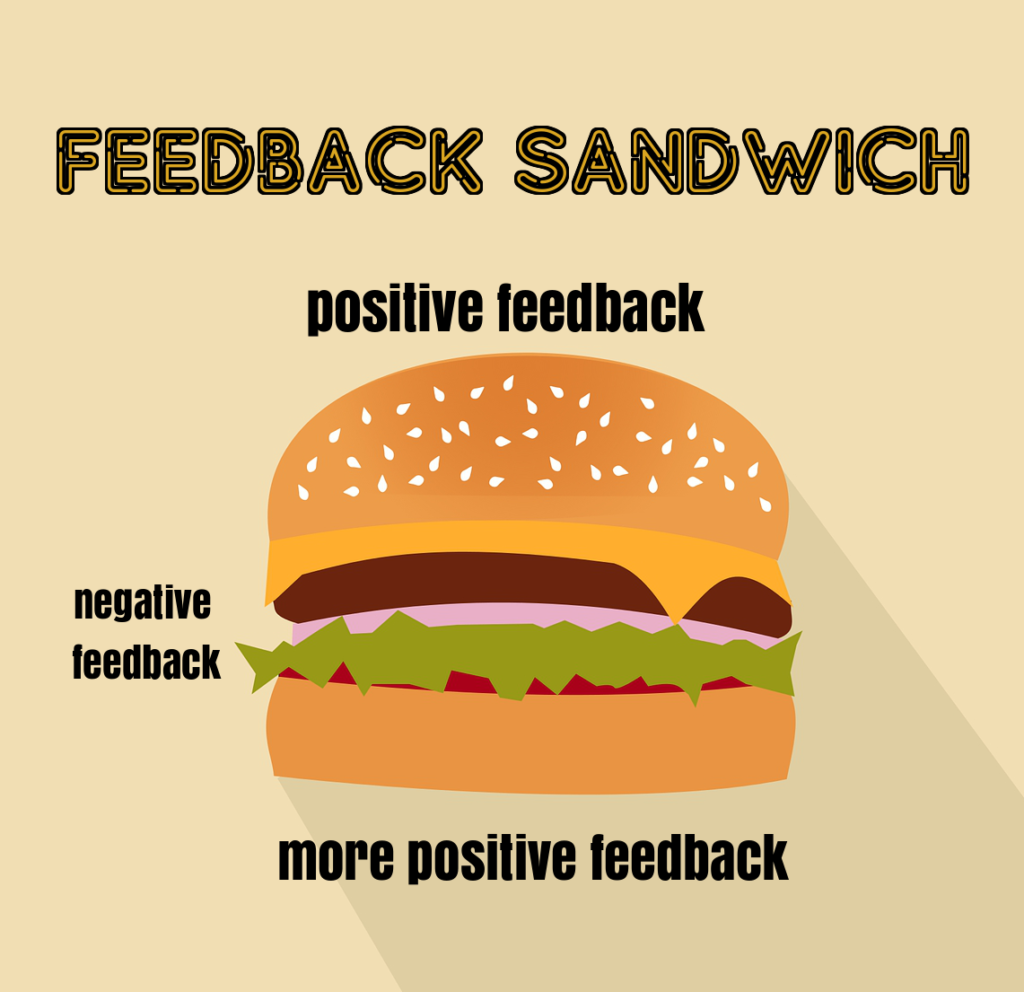 Most of us are familiar with the advice to couch or preface negative feedback with at least two positive messages, aka the feedback sandwich. In theory, this takes the sting out of whatever nugget of knowledge the person wants to drop on you. Some leaders think it’s easier for people to accept criticism if they also hear something positive. Others believe providing both positive and negative comments at the same time presents a balanced performance evaluation.

Feedback is vital to our career trajectories. But despite these good intentions, we often struggle giving—and accepting—feedback. Instead, we try to avoid the task altogether. Or, when on the receiving end, get defensive or take the criticism as a personal attack. It turns out, there’s a much better way to give constructive criticism. If it’s your job to provide feedback, remember that often, how you say it matters more than what you say.

I’ll have the no-carb feedback, please.

Hold the bread—just give me the meat already. Supervisors beholden to the sandwich approach think it helps the giver ease into an uncomfortable conversation. In reality, this delay tactic ratchets up the very anxiety it attempts to avoid, organizational psychologist Roger Schwarz writes in Harvard Business Review.

Umm…Hard pass on that one.

Think of feedback as guidance—not a dressing down.

“In the work environment, we have a duty to give and get feedback,” says Professor Ellen Taaffe of the Kellogg School in this podcast on constructive criticism. “It’s your duty as a manager, but also if you’re managing your career, you want to get feedback. It’s the only way to get better and to get to what you want.”

As a manager, aim to provide timely feedback—don’t wait for a quarterly review. Keep it task or behavior-focused, not personality-based. Feedback should be both clear and actionable. Make it a purposeful conversation, not a one-sided rant. Also, stay open to the possibility that you may not have the only valid interpretation of a given situation.

Taaffe and her interviewer Fred Schmalz talk about how you can tone down the emotional impact of negative feedback by remembering that “people’s weaknesses are often the flip side of their strengths.” Then, they say, the message goes from, “Fix your flaws,” to “Keep playing to your strengths while you neutralize your weaknesses.”

How about feedforward instead?

For many of us, criticism stings in part because we’re powerless to correct our past mistakes. That’s why there’s a growing movement away from feedback and toward feed-forward. Instead of judging past performance, the feedforward approach focuses on a person’s development in the future. In his book The Feedback Fix, Joe Hirsch notes that people often don’t make progress after receiving feedback because they don’t know what to do with it.

“If you want feedback to make an impact,” Hirsch writes, “you have to put it in terms that people can operationalize.” In his book, he cites studies showing that regular feedback doesn’t typically result in a transfer of new skills or habits. But, when you combine feedback with coaching, the transfer skyrockets to 95 percent.

Providing a constructive evaluation is no easy task. But if delivered with compassion and understanding, people are usually open to receiving your feedback if it will help them to succeed. Whether you’re on the giving or receiving end, keep an open mind and a willingness to listen. After all, there can be no improvement without feedback, and we all want to keep growing in life, right?